“In every single drop of water,
there is a different story of life to be told and learned from” 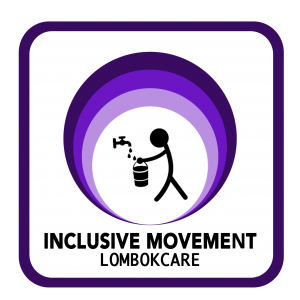 Inclusion Through Arts and Recreation

To put an end on their social isolation due to prejudice, stigma and an overall lack of knowledge about disabilities and strive towards an inclusive society in which we can play, learn, work and most of all:
to live and enjoy together.

Besides being a chairman, Apip is also known as Om (uncle) Apip. His passion for music and other forms of art is now fusing with his management skills in creating an inclusion through arts movement to add up to LombokCare’s missions. Besides that he has a full belief that music and arts are one of the greatest forms of therapy to create progress in the development of LombokCare’s children.

We believe that diversity colours our lives

We accept, respect and include every single person as the way they are

To achieve equity & social justice through empowerment of disadvantaged groups so they can actively participate in society.

To us, self-advocacy is one of the most important ways in which people with a disability have a voice of their own. We empower the kids to learn how to speak up or stand up for themselves. Even without a voice or the inability to stand, there are many other ways to communicate to the world. It is important to emphasize that having a voice of your own does not necessarily mean having a literal voice. People who are non-verbal are able to communicate themselves, their likes and dislikes, their wants and needs, in ways other than words.

Therefor we truly encourage, not only our children to participate in any kind of activity, but also their parents to get their stories out and make sure that their children get the opportunities they need to grow and thrive. One of the ways we stimulate towards self-advocacy is encouraging a buddy program named Sahabat Anak Hebat, in which our children get the opportunity to learn to communicate with others.

To raise awareness, educate, inform our families, professionals, stakeholders and the general public both online and offline.

In every single drop of water there is a different story of life to be told and to be learned from. This is why we place a spotlight on every story that needs to shine so it can bring even more positive energy into the universe.

We believe that telling stories is even more powerful than just providing emotionless information. It’s the emotions that comes with the story that has the capability to touch many hearts. Whether it’s a story of a child, their parents or family members, people from the community or our staff, they are all valuable in the process of striving towards an inclusive society.

In this digital era, we can’t avoid the importance of reaching out digitally. That’s why we commit ourselves to visualise these stories as many as possible. Thankfully more and more people are getting aware, as we’re receiving more and more applications through social media.

To influence policies and practices by being the action to change.

Where there is a will, there is a way. It’s for a reason this is our main motto.
When we first started our rehabilitation program in 2010, there were no governmental funds to get for covering therapy costs. Though this was not a reason for us to stop realising this program. Rehabilitation services were essential and very much needed by children with a disability. With much support from kind individuals and donors, we were able to create this program and support many kids with various kinds of therapy.

As the years went by, we started getting more attention from several governmental institutions. In 2019, more than 400 civil servants from the Ministry of Social affairs came to visit LombokCare to learn from our work strategies. Soon after this visit, not only at LombokCare, but nation-wide children with a disability received the commitment of funds that could be used for therapy purposes.

This is why we don’t underestimate the power of a single act of kindness.

Inclusion Through Arts and Recreation

To apply the magic of arts to create inclusive environments where we can play, learn, work and most important of all:
to live and enjoy together.

There is no wrong or right way in doing art, it is a matter of someone expressing him/herself, not matter how others perceive. Besides the fact that art can function as therapy for the person itself, any kind of art has the capability to connect people.

In 2019 LombokCare has made a debut with the short film ‘Alma’, the first film in the NTB Province starring a girl with cerebral palsy: Alma herself. The premiere held in the theatre Taman Budaya has attracted many people who eventually wanted to initiate an inclusive activity by themselves.
We invite individuals, groups and communities to join in our inclusion through arts and recreation movement.

Khaerunissa, the girl who could finally walk at the age of 11 years old

No seizure will stop Agisna from thriving

Being an orphan doesn’t keep Rahman from achieving higher goals.